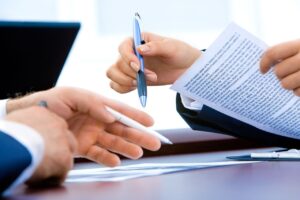 Most business owners have better things to do than to get into lengthy and expensive legal disputes regarding their business operations.

A good contract, and some negotiation at the beginning of the transaction, can save a lot of time and money later.  A well-crafted contract, with input from a commercial lawyer, will make sure everyone knows what’s in the contract and that each party is getting what they expect out of the transaction.

At its most basic, a commercial contract ensures that all the parties will act in certain ways or perform certain actions toward each other, so that they also get the benefit of predictable and described conduct per the agreement in return.

Commercial contracts govern the behavior of the parties during the term of the agreement, and possibly even after it is concluded, such as in a non-competition clause. The commercial contract should also include a provision about what the penalties are if the contract is not complied with by a party.  It may also discuss how to settle disputes, such as mandatory arbitration.

There are many, many other elements of a good commercial contract, and what should be included, but without experience in these kinds of contracts, it can be difficult to tell if any of the parts are missing. A commercial contract is specific to the particular commercial transaction being carried out, so it has to be reviewed in that context; there is no one-size-fits-all solution.

There could even be ancillary agreements, such as a non-compete or a confidentiality agreement.  The commercial lawyer will have the experience and the knowledge to make sure that all of the parts of the contract necessary to protect the busy business owner’s company are present and accounted for.

The experience and knowledge of the commercial attorney will ensure the best possible support during the negotiations and fulfillment of the contract.

Commercial contracts cover all sorts of agreements, include periodic transactions, like signing a property lease for a location, or more repetitive ones, such as the manufacture and purchase of certain goods.

When the contract is negotiated, and before it’s signed, it’s important to do due diligence and make sure that the parties are capable of fulfilling the contract, whether it’s transporting goods or providing data. Even with the best of intentions, one party may be unwilling or unable to complete the contract, for reasons that may or may not be under the control of the parties.

If a party doesn’t fulfill the terms of a contract, then the party is in breach of the contract.  Ideally, the commercial law attorney assisted the business owner in identifying and quantifying the risk inherent in the contract. In the event of a breach, a well-negotiated contract can save time and money; if the parties have agreed to a penalty, then it’s unnecessary to go to court to figure out what the penalty is.

There are “public” laws and regulations that apply to all contracts, and there may be some enforcement mechanisms applicable to the contract at issue, but it can be a lot more efficient and cost-effective to make “private” law in a contract.

The private law may state what the consequences are for a contract breach and how the penalties can be enforced without going through lots of time-intensive and burdensome legal requirements.

I hope this information has been helpful.  I’m Jenna Zebrowski, and I’m a real estate lease lawyer, but I’m not your lawyer yet.  This information is provided not as specific counsel, but as general information to help you make an informed decision about your commercial lease.  Remember, hiring a lease lawyer in often much cheaper than getting in a bad business situation.  Give me a call if I can help (817) 841-5762.

Other Helpful Questions About Commercial Law